The flooding of 1914 left Old Town Carpinteria (this photo taken near Reynolds Avenue) mired in mud and water, but the homes that remained standing belonged to the lucky locals—some buildings were swept away entirely. 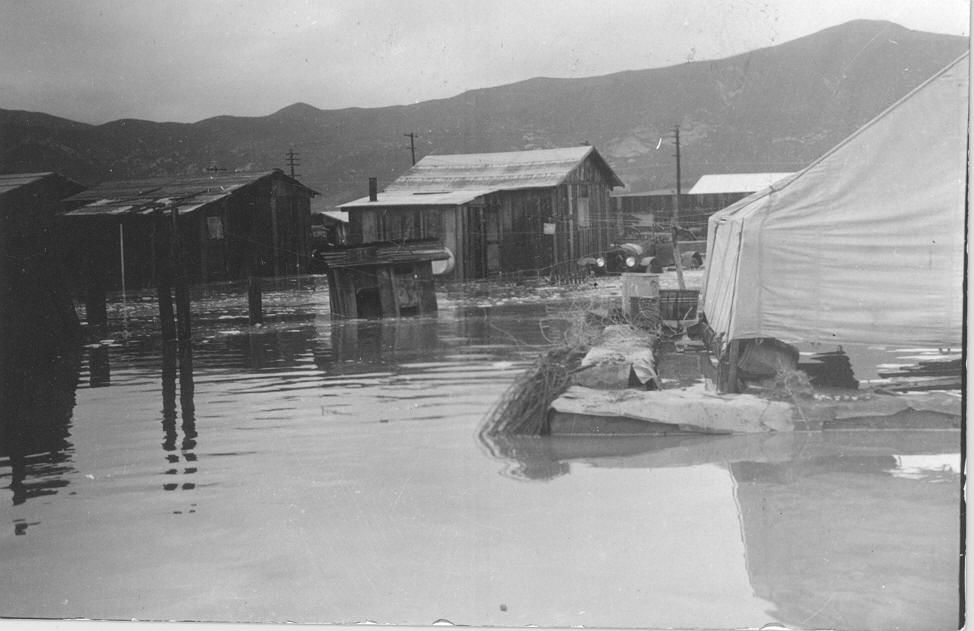 “All along the coast the roads and bridges were washed out. For over a week, no one could get anywhere,” recalled Albertina Rodriguez in her column published in the Carpinteria Herald on Dec. 12, 1966.

When the storm struck, Rodriguez was home alone in her house near where Carpinteria High School stands today. She reported that Santa Monica creek overflowed and moved across the land toward her house. “The creek was 15 feet deep in places and running like wild,” she stated.

Damage from the storm extended throughout the valley. The railroad bridge over Carpinteria Creek washed out, and the tracks on the west end of Carpinteria were underwater. According to Rodriguez, the floodwaters swept through homes in Old Town, leaving mud and sand 4- to 5-feet deep and sending some homes out to sea.

The biggest tragedy of the flooding was the death of John Rockwell. Rockwell, who worked as the mail carrier, lost his life driving through a local ranch as the floodwaters rose.

The storm severed Carpinteria from Santa Barbara and Ventura, leaving locals with dwindling supplies of food. Rodriguez wrote that Glen Hickey hitched up his mule team and ventured up to Santa Barbara, bringing back bread, other food and the first news from outside Carpinteria in over a week.

And Many More! All of Orange County.